In February Chill Pill launched their live recording of our Spoken Word show at The Roundhouse in Camden. This is a pilot and an experimentation of an idea we've had for a while now and we hope it makes enjoyable listening.

Posted by Raymond Antrobus at 12:20 No comments:

So, Chill Pill were on the road this weekend, first we Hit The Ode in Birmingham, a night curated by one of the nicest people in poetry/life 'Bohdan Piasecki' in association with Apples & Snakes. We shared the stage with David Morley who writes poems under the influence of Lorca's 'Gypsy Ballads' and Austrian poet Yasmin Hafedh who gave a moving performance in German with her words projected in English.

The following day we headed to Brighton to feature at Waxing Lyrical alongside Anthony Anaxagorou, Sabrina Mahfouz , a very brilliant Liverpool band called 'Normanton Street' and local rapper 'Frankie Stew'. Poetry on a Friday was a bold move but... We pulled it off!

Next show is going to be an interesting one as it takes place in Guy's Hospital on 23rd April for St.George's Day. We'll be performing poems that commentate on Britishness for patients.

After that we'll be hitting the road again in May, this time Bournemouth for Louise Keeley's 'Freeway Poets'! 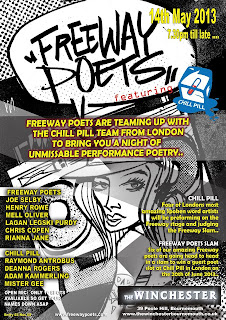 Coming up in the nearer future, myself and Sam Berkson are hosting Hackney's Hammer & Tongue Slam with an exciting line up on April 2nd at The Victoria featuring...

Posted by Raymond Antrobus at 08:00 No comments:

Huffington Post launched this poem about a conversation I had with an important woman in my life.


"It's a simply told lesson in the value of paying attention to those who are older than us, and a great poem to celebrate International Women's Day" 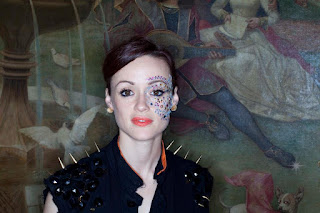 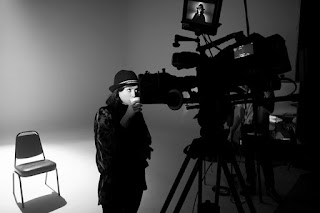 Keep updated on her site - http://www.sabrinamahfouz.com
Posted by Raymond Antrobus at 10:44 No comments:

Very much looking forward to performing at these nights across the UK this March. Other news is my book of poems, 'Shape & Disfigurement' is now being stocked at Southbank's Poetry Library, you can order a copy for your own library here -

Also, if you have a minute could you vote for Chill Pill as 'Best Regular Spoken Word Night', 'Shapes & Disfigurements' as best pamphlet and any performer you've seen at Chill Pill for Best Spoken Word Artist for the Saboteur Awards 2013? -

http://sabotagereviews.com/2013/03/01/saboteur-awards-2013/
Book and quote 'EARLY BIRD' for your discounted tickets to 'The Big One' on May 23rd with poets from some of the best regular poetry nights in London.

Dean Atta (Come Rhyme With Me)