Midnight Run With Inua Ellams This Saturday (GET INVOLVED!) 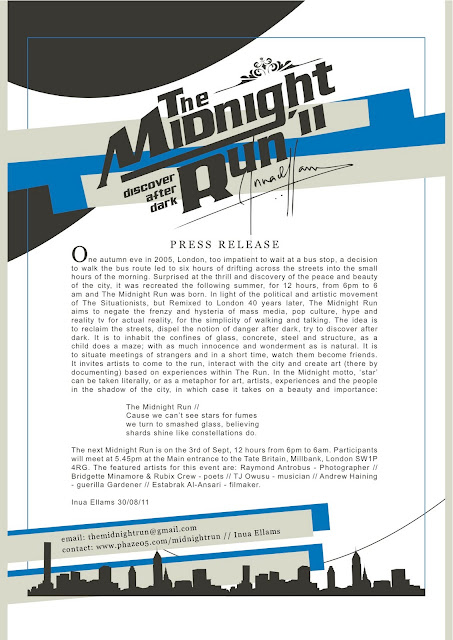 Midnight Run News // 16/08/2011
Hey Hey HEY! Welcome to the 3nd MNrun Newsletter. I hope you are well. It looks like the weather will hold out, so on possibly the last weekend of summer, the MNrun will be on! {phaze05.com/themidnightrun}
3 News Items // WHERE TO MEET // WHAT TO BRING // THE ARTISTS //

THE ARTISTS //
To each Midnight Run, 5 artists are invited. Their task is to entertain within the MNrun, and also to capture instance of the run in their individual art forms. Here they are:

PHOTOGRAPHER: Raymond Antrobus is a spoken word artist, poet, writer and a photographer. He is an accomplished young one, has performed alongside authors and poets such as Margret Atwood, Michael Horovitz, Lemm Sissay and Polarbear. Raymond’s photography has featured in The Big Issue, The Evening Standard and showcased online by the world famous Southbank Centre.

POETRY & SPOKEN WORD: Bridget Minnamore & Rubix. Rubix is a collective of 15 young London-based spoken word artists who began life as the Roundhouse Poetry Collective. After taking their first show ‘The Greatest Poet That Ever Lived’ to the Edinburgh Fringe in August 2010, Rubix became an associate company with the Roundhouse. Following a scratch performance of their second show ‘House Party’ at the Roundhouse studios, Rubix are currently developing the material for a wider audience. They have performed at the BAC, Bang Said the Gun, Whitechapel Gallery, Rich Mix, Poejazzi, Shoreditch Festival, Shunt, Big Chill and Camp Bestival.

GUERILLA GARDENER: Andre Haining spends most of his day organising events and designing websites for large corporate clients.  He also runs his not-for-profit organisation EFORESTS (www.eforests.co.uk) which helps create community woodlands around the UK and runs urban food-growing projects in London.  A keen amateur gardener, he started guerrilla gardening in 2006 after seeing Richard Reynolds (guerrillagardening.org) on the TV one day. Since then he has worked with Richard and other guerrilla gardeners, at numerous locations around London, turning grubby patches of neglected land into beautiful urban spaces. He also helped build the Recycled Garden (recycledgarden.net) at the Hampton Court Flower Show in 2008

MUSIC: Tj Owusu, A Ghanaian multi-instrumentalist brought up on a healthy diet of eclecticism. He plays the weissenborn, a Hawaiian instrument designed by a German luthier. Picking up the instrument in his early teens, he was captured by the weissenborn's vocal warmth and ability to paint audible pictures. His object is to create a soup for all musical buds through instrumentation.

FILM: Estabrak is a MA graduate of film and media production from a visual arts background. She began as part of ‘Imagine Art’, a world wide arts project hosted by Guardian Unlimited and has produced stunning short films and installations showcased at the TATE Britain and The Showroom Cinema, Sheffield. Her work has had press coverage in Italy's 'Amica', Middle Easts 'Bidoun' and UK's 'Diva' magazines to name a few. She hopes to travel the world challenging the nature of perception through visual story telling.

That’s it!! Remember to sleep like a whale on Friday night. Roll outta bed late in afternoon on Saturday, for when the eve comes, we MNRun!
Posted by Raymond Antrobus at 10:15 No comments:

Thank you for contacting us regarding ‘Newsnight’, broadcast on Friday 12 August.

We understand some viewers felt David Starkey's contribution to the discussion on the England riots was inappropriate and racially offensive. We note some viewers also felt Dr Starkey's views were not sufficiently challenged by presenter Emily Maitlis.

Firstly, it is important to stress that Dr Starkey’s views are his alone and not those of ‘Newsnight’ or the BBC. It is part of ‘Newsnight's remit to air and challenge controversial views and we believe his perspective on the riots was robustly challenged during the course of this discussion.

The aim of this, at times heated, ten minute debate was to examine the causes of the recent riots and looting and in many ways it encapsulated different strands of opinion, both ideologically and socio-economically, as to what provoked the violence. Presenter Emily Maitlis directly challenged David Starkey’s views on a number of occasions, asking: ‘Is black culture the cause of the rioting?’ and ultimately ending the discussion by asserting that Dr Starkey was ‘using black and white cultures interchangeably as good and bad’.

Aside from Emily Maitlis’ interjections, guests Owen Jones and Dreda Say Mitchell clearly took exception to David Starkey’s opinions and were given ample time and space to make their disagreements heard. Owen Jones particularly highlighted that many people listening would find the views expressed offensive, and Emily Maitlis provided further context - making it clear that David Cameron had stated that this was not a race issue, and that people taking part in the riots came from a range of ethnic backgrounds.

Although some viewers found David Starkey’s arguments offensive, others agreed with them. It is not ‘Newsnight's’ job to censor the views of our guests; the programme would rather challenge them in a robust way on air, and allow viewers to draw their own conclusions. We believe this discussion was conducted in a fair and professional manner.

Please be assured your concerns were raised with the programme.

Thank you again for taking the time to contact us.

NB This is sent from an outgoing account only which is not monitored. You cannot reply to this email address but if necessary please contact us via our webform quoting any case number we provided.

Since the London Riots I've heard some of the most outrageous, outright racism mainly from (educated and unappreciative) white middle class people. This weekend I did a gig at a Festival in Bath and got into a conversation with a lovely (white and higher educated) lady who works for a bank who had this to say.

"What on earth do these ethnics have to complain about living in this country? Its not like South Africa is it? no! we have a fair and functioning society with free health care and welfare state. It's disgraceful and they should have bought in the army"  etc

"White people know about oppression, my friend is a white South African... I mean sure she has black maids and the rest of it but she's having a hard time as a white person out there"

I've not seen South Africa for myself but I'm going out there to work in a township for two months in November. I'll comment on this when I've seen it for myself but I think I know enough to be sure this is a shallow and insensitive comment.

Now, lots of people I know personally have shocked me with some of their twitter comments and facebook updates and I couldn't help but be a little conscious over my own social standing as a young, Jamaican and British male born and raised in Hackney (in a single parent home).

I used to do voluntary work in Hackney Youth Clubs and I've grown up attending quite a few around London. The comment made by a Politician about "the kinds of kids that got involved with the riots aren't the kind to want to go to university or play ping pong at a youth club" is a horrific statement to make.

I've seen kids who despite carrying knives and smoking weed on the (youth club) premises, responded positively to the youth club environment. It kept them off the streets and many of them were pretty good at ping pong. (ha!)

Anyway, after seeing Starkey's comments which has angered and embarrassed as many white people as it has black. I couldn't help but once again be made aware of the horrific prejudice that has surfaced from the skins of our society in this past week.

This video from Nabil Abdul Rashid is on the money!


Here's a poem by Chill Pill's Mista Gee which featured on BBC Radio the other day.

Dear Mr Juvenile (An Overview of the 2011 England Riots) by Mr Gee poet
Posted by Raymond Antrobus at 10:59 No comments:

Conversation With An Anarchist During The London Riots

fuckin’ police look at em’ all lined up. No wonder people fucking hate them. You feel the gravity here? That’s what fear feels when its injected by pigs... fuckin’ hell, the air here could burst into flames. Burn the city and pork chop these cunts with their sticks! Ere’, I dreamt I wrote a play last night and it was called ‘God The Orchestra’ and it was about a bunch of puppets that go rioting! De’ja’fucking vu, eh? How’d it end? Fuck knows, the puppets burnt their strings and scattered. I woke up in my bed feeling like something is trying to tell me something and this is fuckin’ it! These people call their belief a system and if that’s the case everyone needs another mechanic! One with the earth on their hands instead of blood and oil, that’s the only dirt you can roll in and be the cleanest soul alive. We want peace but this is our war for it. Yeah, we all want fuckin' peace except the pigs who want power. I'd happily sit around and smell the shit out of flowers when things are right! When things are right I'll grow a fucking garden and everyone can bring pig meat to the barbecue! That’ll be the day to welcome a neighborhood that’s right for real fuckin’ people!
Here's another voice on the street -
Posted by Raymond Antrobus at 18:28 No comments: 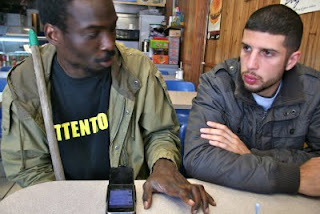 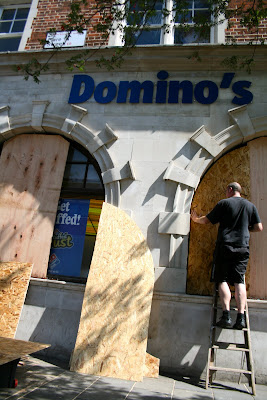 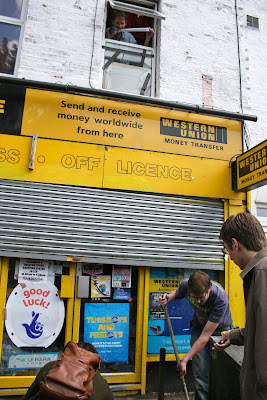 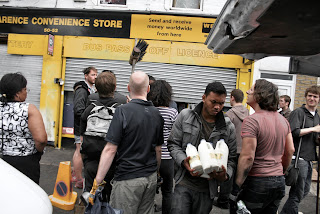 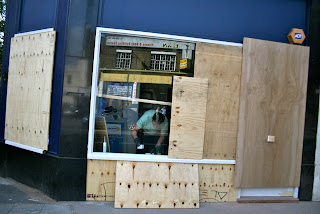 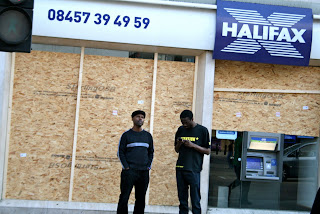 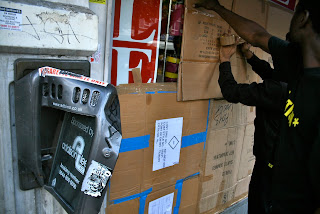 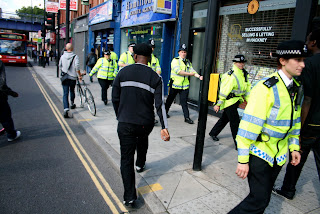 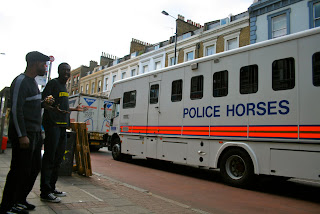 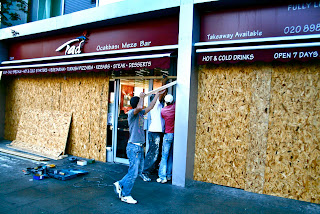 Posted by Raymond Antrobus at 12:40 No comments: 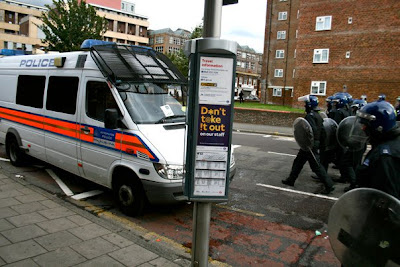 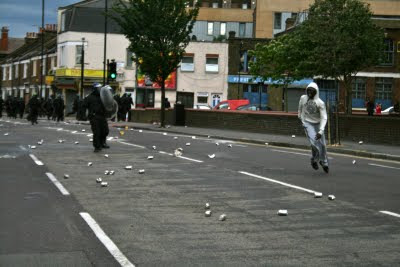 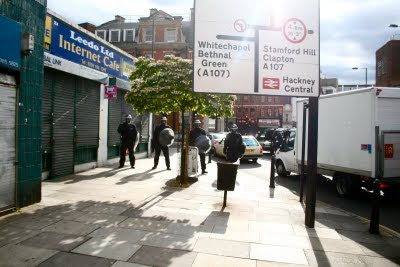 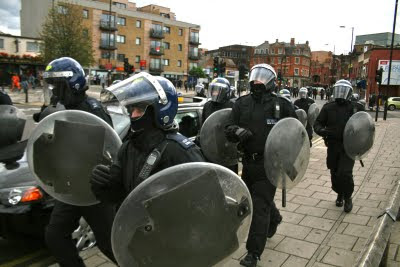 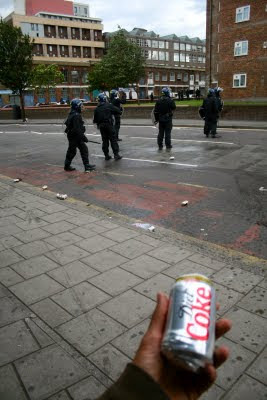 Posted by Raymond Antrobus at 12:14 No comments:

if I look good
I'm standing a good distance away
from myself.

if I see myself differently,
it’s because other people see me differently.

I talk to myself more than I talk to anyone,
talking to myself is like talking to someone that won’t shut up!

my head is not in the sky, I talk to my feet a lot.

I’m always asking them why I can’t move on as easy as they do.

I look at myself in a broken mirror and see a thousand people that don't want to be me.

I go to parties and sit in the corner and read.

someone will come up and ask what I’m reading and I’ll talk about myself.

I think everyone here is thinking that I think too much.

because there is always something wrong with them

especially if they fancy me.

Posted by Raymond Antrobus at 18:38 No comments: 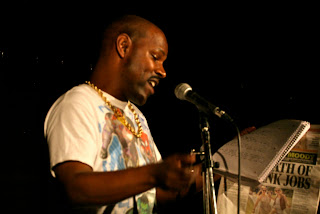 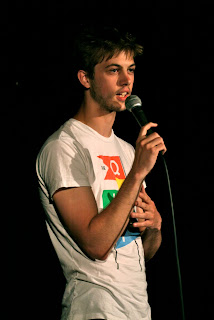 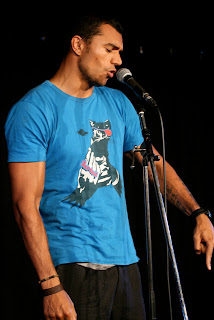 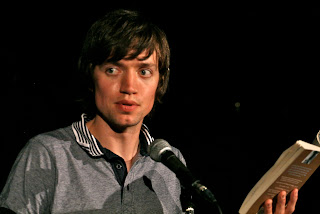 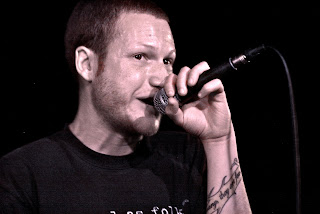 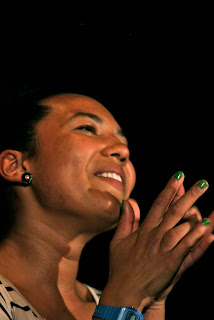 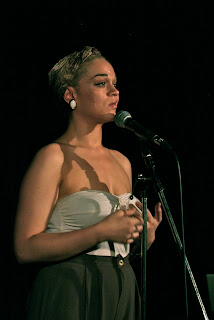 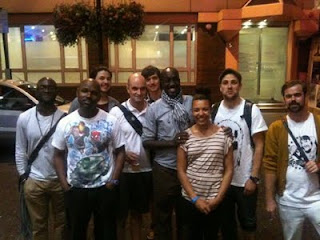 Posted by Raymond Antrobus at 04:33 No comments:

Email ThisBlogThis!Share to TwitterShare to FacebookShare to Pinterest
Labels: Chill Pill, So Chilled

Harry Baker has been making waves on the poetry circuit this year and here's is part of the reason why.

Christian Watson featured on this blog earlier in the year. We discussed if Rock & Roll killed poetry. Now he discusses Police killing democracy in this video he just put up.

Posted by Raymond Antrobus at 04:00 No comments: