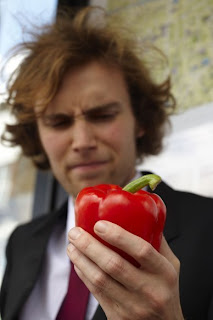 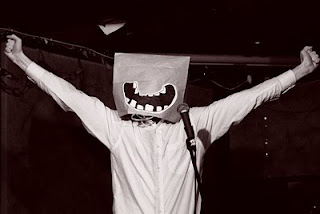 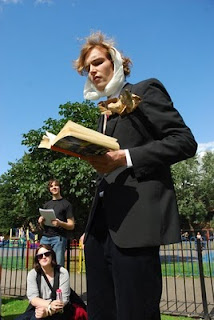 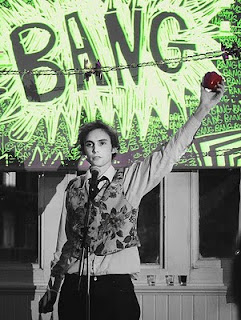 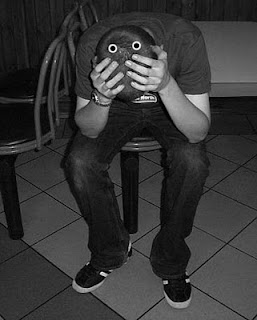 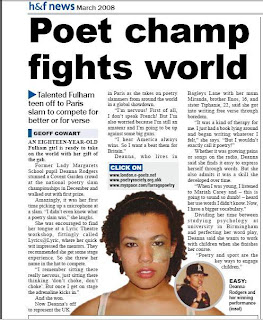 In my first ever performance in a Slam Poetry contest, I was shouty, monotone and over-animated but I somehow reached the ‘Farrago UK Slam final’ head to head with the energetic, loose canon ball that is Deanna Rodger.

Deanna has this charm she carries to the stage, her nerves hold her face in the widest but shyest of smiles. You don’t quite expect to witness the breakage of a storm... but you do... and I take no shame in losing that final to such a wild force of nature.

She has this way with stretching out a multi-syllabic metaphor and delivering four lines in one breath while steering you through the heavy winds of emotion contained in the voice of her poems.

She’s a natural and unconsciously pulls off some of the finest crafted Spoken Word poetry London has to offer.

Q. Yo Dee! Remember when we met? How the hell did you end up at the Farrago Slam that night?

Dean Atta who was my sort of mentor at the time told me to go down and do it, so I did!

Q. I was so amazed when you said you don’t read much poetry and you couldn’t name many poets – where on earth does your fire come from?

I could name a poet I just didn’t have an interest in it! I have always been a bookworm and still read an awful lot, but I didn’t read poetry unless I was in a classroom. To be honest poetry found me, I never thought of myself as a poet and I certainly wasn't searching for it. I think I have always had something to say but was never really able to speak it with sense. Poetry was a safe way to do that.


Q. Got a favorite poet yet?

Ah I'm ready for this question!! I got given a book of the entire collection of Langston Hughes and I am enjoying it, I even memorized a quote! I try not to have favorites. I don't think I've seen enough (defiantly have not read enough) to put a name in paper. Though there is a sonnet by Shakespeare I really like.

Q. I know you are uncertain about whether you can have financial stability and an active career in Spoken Word – would you believe me if I said in ten years time poetry is going to make us RICH!?

Yeah I would! I have no doubt that there are a lot of young people that see a Market stall for poetry. However I have to ask myself whether I want to rely on an industry that has the attention span of a toddler? As much as I would love poetry to become more lucrative, I would prefer it to stay beautiful rather than turn into a competitive brawl of people calling themselves poets because they exploit humor, shallow clichés and rhyming couplets to win the crowd.

Q. You have got into events organizing; you did the Lyric Lounge with Dean Atta, which was a big night! How’s that movement going? 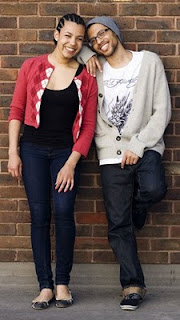 It's grown and left home! We are focusing on a new night called 'come rhyme with me' which launches on the 30th July and features some of the hottest fiercest talent in the scene. Excitingly Bothyself and Dean (Atta) are associate producers of a festival in association with Richmond MENCAP called Play at the Waterfront which will be on the 7th August. I've also linked up with you and Mista Gee to organize a more accessible weekly evening 'Chill Pill' which is a beautiful thing! I'm trying to try everything. I'm young, I'm still learning. Luckily I have got some very good supportive and inspiring people around me!

Q. Where do you see yourself in 4 years?

Lord knows his plan for me; I can't be trusted with it just yet! I can only hope to be more everything than what I am now.

Q. Spoken Word has taken you all over the nation and to parts of Europe – Germany, France etc how has travelling influenced your performance and writing?

(smiles!) I think this question is better suited for a conversation! In short though, travelling has shown me that there is no limit to what you can write and perform! The slammers in Germany are very performy! And it definitely makes their performance universal. In France I was lucky to see a world of talent and styles and I would say that although I'm still writing from me, I feel like I am a richer writer able to draw from different societies. Visiting different lands also helps me to put my own life into perspective and reflect. 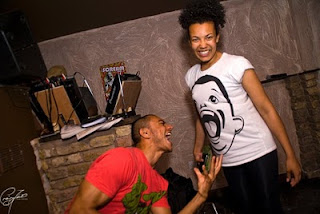 Q. If you have kids would you like them to follow your footsteps as a Spoken Word artist– if that is what you pursue?

I will have kids! And obviously I would love for them to be writers and to be creative but that could be in anything they love. I don't want to put ceilings over my kids. Boundaries yes, but not ceilings.

Q. Finally, you’re sick, and the London Spoken Word circuit needs you – you know that right?

Ahh that's nice! I don't know about need me. I think that's a bit too much pressure, I think I am good at what I do and I love what I do, I just want to do my bit, encourage other young talented writers, have fun, make friends, create experience, make money and a name then bounce and make space for the younger’s!

Posted by Raymond Antrobus at 03:45 No comments: