Myself, Keith Jarret, Pete The Temp, Indigo Williams, Catherine Brogan and Dean Atta have been enrolled at Goldsmith's University to do a MA in Writing/Teaching and Spoken Word Education. The programme is pioneered by a teacher/ poet I met in Chicago two years ago called Peter Khan.
I left school with three GCSE's to my name and never bothered with a degree, but after seeing this opportunity to work in schools and get a MA that involved Spoken Word Poetry I pushed for it hard. I was interviewed by three Goldsmith's Professors in English and Creative Writing, the head of a secondary school, Apples and Snakes and other teachers of poetry who selected us as the final six.
This is quite a big deal as its an academic acknowledgement of Spoken Word as an art form and an actual genre of poetry. Spoken Word and Slam poetry has been consistently written off by poets, writers and journalists who solely commit to the literary traditions of poetry and choose to dismiss Spoken Word as performance art/theatre.

Poets such as Roddy Lumsden, Bohdan Piasecki, Niall O'Sullivan, Nii Parkes Mista Gee and Hollie McNish have advocated for Spoken Word Poetry, giving it more visibility/credibility over the years. Hollie launched her own Spoken Word In Education company, Mista Gee hosted a five series run of Bespoken Word on BBC Radio, Roddy encourages poets to engage on stage and attacked an Oxford Professor Of Poetry for saying "Spoken Word Poetry is unimportant" in The Guardian. Niall and Nii are part of the publishing house 'Flipped Eye' who have published poets known for their performances such as Inua Ellams, Zena Edwards, Roger Robsinson, Malika Booker, Nick Makoha etc. Bohdan Piasecki has featured on BBC Radio performing his work and speaking on the value and skill of being a Spoken Word poet with Ian Macmillan. He also runs one of the best poetry nights in the country called 'Hit The Ode' in Birmingham. 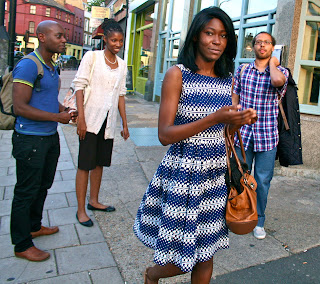 All of us feel honoured to be piloting this course and we hope it will help establish greater appreciation of poetry and spoken word. We enrol next Monday. 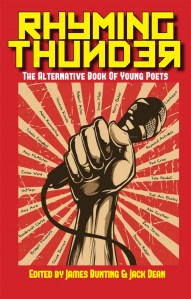 Excited to have three of my poems featured in this new anthology alongside poets such as Tshaka Campbell, Simon Mole, Adam Kammerling, Deanna Rodger, Rob Auton and much much more. The book was launched in Bristol last week and is launching in London on Wednesday 26th at the Battersea Mess & Music Hall. 7.30pm.

'The Coloured Experience' Photography Exhibition
I have a photography exhibition launching between 1st - 7th October at The Albany. It's part of the AfroVibes Festival. I'll be doing a talk/performance in the space on Thursday 4th so please come down to that. A travel journal I wrote in South Africa has been published and will be for sale on site.

Jamaican poets Kwame Dawes & Mervyn Morris are reading in London and I'm honoured to be on the bill alongside them.

After the brilliant screening of 'We Are Poets' last month, we return to our regular high quality open mic and feature poet. This month Kayo Chingonyi whom featured in 'The Salt Book Of Younger Poets' and brought out his own poetry book, 'Some Bright Elegance' earlier this year will be reading at the house.

I'm super excited to be touring my poetry across Germany from 22nd October - 2nd November 2012.

Here's the tour schedule of the areas I'm performing in so far.

P.S.
it's been a great summer of festivals... until next year! 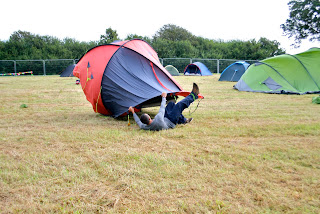 Posted by Raymond Antrobus at 15:36 No comments:

The Coloured Experience Exhibition at The Albany (1st - 7th October) 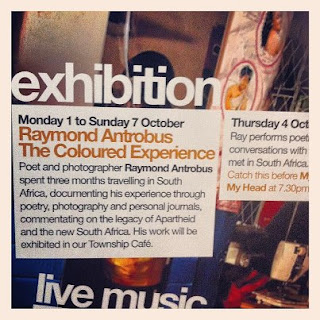 Give me a wish
and I will take it where the sky takes care
of everything,

I’m old enough to remember the world quieter,
so give me another wish and I’ll be younger,
always with enough sleep and tickets in pockets
to take me onward,
beyond woods through days that are green before
they’re black
and I got no yellow on my spine.
Another wish and birds will envy
the smells I carry of other places,
they will envy the warmth
in my air,
they will envy the view I found of our city
and the route
I took to whatever it is I love.

Another wish and I won’t get my mouth
out of her kiss,
the girl from the stars that fell to earth
to discover
the planet I am.
Posted by Raymond Antrobus at 14:50 No comments:

Interrogating Depression is a poem I wrote after thinking about how people have many different ways to describe depression and what it is... I caught myself sitting down and asking myself if I had it... This poem was my way of interrogating it.

It's a new one and Alex Patten made the music and sung on it... I think it sounds pretty good.

Posted by Raymond Antrobus at 03:02 No comments:

Sitting In The Sun & Writing About You (Poem Draft)

you smile from east to west,

I want to travel across your mouth
like I owe you the country.

My feet know your soul,
my eyes know where you go
even when we sleep apart,
my arms are covered
in your ground,
hold me until I'm buried.

Should I stop
and ask questions

if it explained its radiance?

ok, let me stop,
because its warm and I love you
and that should always be enough.
Posted by Raymond Antrobus at 09:15 No comments: 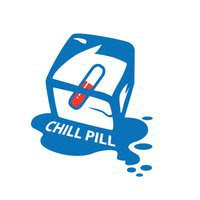 Our next Chill Pill (27th Sep at The Albany) is set to be the biggest show yet! Here are the names gracing our stage.

Soweto Kinch is a British jazz alto saxophonist and rapper. He has won numerous accolades including the Rising Star Award at the 2002 BBC Jazz Awards and the prestigious White Saxophone prize at the Montreux Jazz Festival. In 2003 and 2007 he won the MOBO prize for Best Jazz Act. In the same year his debut album Conversations With The Unseen was nominated for the Mercury Music Prize, but Kinch lost to grime MC Dizzee Rascal. The year 2004 saw Kinch win two BBC Radio Jazz Awards: Best Instrumentalist and Best Band, along with the Peter Whittingham Award for Jazz Innovation.

Sabrina Mahfouz is a poet, playwright, performer and person. Her debut solo show Dry Icewas nominated for The Stage Award for Best Solo Performance at Edinburgh 2011 and called ‘in a different league…astonishing’ by The Times. Her new play One Hour Only won the Old Vic New Voices Edinburgh Award and will be presented by Made From Scratch at Underbelly in Edinburgh 2012.

Host of one of the biggest spoken word venues in the world, (The Nuyorican Poets Cafe' in New York), Jive Poetic is featuring at Chill Pill!

Jive Poetic is a poet, teacher and DJ, he has toured Australia, Canada & Europe. His CD Perpedenctive and poetry music videos and have received rave reviews and he is published and translated in several anthologies.

There are also 6 Open Mic slots on a first come first served basis.