Dear Michael Gove - Educating The Mind Is Not Colonising It 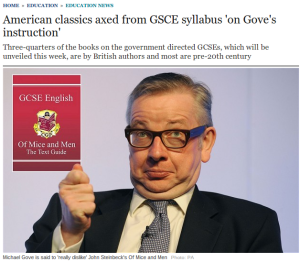 Michael Gove has removed Of Mice and Men and To Kill A Mocking Bird from the National Curriculum. The two texts that explore race politics in the classroom. On a day when Right Wing political parties are winning seats in the European Election it's hard to pass off Gove's agenda as sheer naivety, this move is suspiciously political. Classrooms are one of the most influential avenues for transforming the attitudes of society.

I work four days a week as a poet in residence at an East London school. Most of the students are second generation African and Caribbean British. While reading 'Of Mice & Men' to a year 11 class, one student responded powerfully to the treatment of Crooks, (the novels only black character who is repeatedly referred to as a "nigger)", by throwing the book across the room and stamping on it. The following day we had an in class debate about the use of the word, to gauge how teachers (who are mostly white) can engage with their black students sensitively. This persona piece is inspired by the views expressed by the students.

The next question is what texts will replace Steinbeck and Harper Lee? How subversive will they be in their ethnic and gender representation? Dickens, Shakespeare, Shelly and Keats have numerous subversive representations of women in their work, other minority groups, not so much. Granted that Shakespeare's imagination was informed by his knowledge of Africa, ("she hangs upon the cheek of night like a rich jewel in an Ethiope's ear") and the Middle East ("I know a lady in Venice would've walked barefoot to Palestine for a touch of his nether lip").

Educating the mind is not colonising it.


"Some of you will be aware that Michael Gove has denied narrowing the curriculum. Let's address this and keep fighting.
No matter how he is choosing to spin it in the wake of popular opinion the GCSE curriculum has been narrowed and made more anglocentric. If students are ALL to be examined on Romantic Poets, a 19th century novel, a Shakespeare play and a British (why British?) text since 1914 then the curriculum is being limited not expanded. His claim that "If they wish to include Steinbeck – whether it's Of Mice and Men or The Grapes of Wrath – no one would be more delighted than me" is a nonsense similar to his assertion* about averages. Teachers will be unable to do anything extra, they'll be busting a gut to make these difficult texts appealing. Keep the pressure on, please!
*Q98 Chair: One is: if "good" requires pupil performance to exceed the national average, and if all schools must be good, how is this mathematically possible? Gove: By getting better all the time."
Source: https://www.change.org/en-GB/petitions/michael-gove-reconsider-the-changes-to-english-literature-gcse
http://www.telegraph.co.uk/education/10857133/Michael-Gove-Kill-a-Mockingbird-Id-never-dream-of-it.html

http://www.spectator.co.uk/features/9158241/the-disturbing-certainty-of-michael-gove/
Posted by Raymond Antrobus at 15:24