Johannesburg, The Apartheid Museum & Maboneng, An Example Of Positive Gentrification

Currently, I am in Johannesburg, sat on the top floor, a mile in the sky of a hotel room with a group of theatre producers and programmers. Joburg, a city described with hard edges, grumbles below us. Peter Stark OBE, a former theatre director and a cultural policy expert gives us an orientation to the city, explaining how the city creaks and groans as it tries to keep up with the first world mechanics of free market capitalism. He looks and speaks like a larger version of Sean Connery in the extraordinary league of gentlemen, although he has an English charm about him, he’s also blunt and to the point. He’s able to articulate the brutality of European Colonialism and white supremacy in Africa in a way that even knowledgeable white people in England couldn’t without lowering their voice. You can’t avoid talking about race in South Africa, it’s a country built on racism since European invasion. Peter Stark, to be stark, is stark about being white and English in Africa. This, paradoxically, makes me comfortable with him. “Being white in South Africa is like being a V.I.P toilet” says Peter "after we’re continuously told we’re special, it’s hard to realise our shit isn’t as special as everyone else's”. 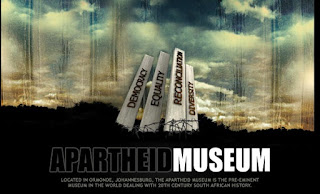 After visiting the Apartheid Museum, an intense and moving experience, I found myself shaking my head at the fact that the theme park next door and the Apartheid museum is owned by the same company, (this company also has shares in the skin bleaching industry if I heard Peter Stark right, it was also a site where gold was struck when the Dutch were settling) this is capitalism, starkly Amoral, what makes money, makes money. It also made me think of the gentrification that’s been happening in London. A few weeks ago I overheard a guy outside a coffee shop in Bow, tell his friend he’s “moved to Hackney because it’s meant to be jumping”, but he’s disappointed with how many old people and school children are about. I had to pull him up and say “Hackney is a community, not a theme park”. But this is it, if you got money and no emotional investment in an area, you care less about the cost of your fun.

Later I visited Constitutional Hill, another intense experience looking at the condition of those jailed in the Apartheid era, including Gandhi and Winnie Mandela. Afterwards, just round the corner there was a musical theatre, walking out of these dreaded historical landmarks into singing and dancing (and you couldn’t overlook that the directors and most the actors were white), there’s something insensitive about that. I’m not saying anyone needs to be in constant shame, but rollercoasters and musicals? it feels like two long white middle fingers.

Speaking of Gentrification, I visited Maboneng this evening and met the community activists that managed to nurture relationships with the town property developers. A town that has investors and the guidance of a local community who see the area as a home, not a theme park. The money here is doing more than talk, it’s listening. The cynic in me wanted to tell the locals about Hackney and Brixton as a warning tale, but I didn’t need to, they understood. They felt they’ve managed to negotiate the space to suit both, local community and new investments. The artwork on the walls around the city is staggeringly striking. A large portrait of a young Nelson Mandela in his freedom fighter days, posing with boxing gloves on looms over the town. The statement is clear, the people here will not be moved from their own movement. 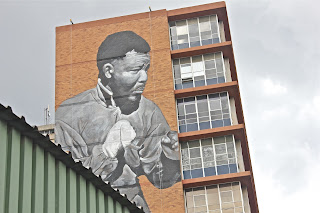 Posted by Raymond Antrobus at 03:39