I met Indigo Williams at a show I did with her at Middlesex University last February. She writes and performs with such intense conviction she could be considered a weapon.

Slender at the waist, cheek bones high and a flower beaming from the silk branches of her afro… she’s cute… but the name ‘Indigo Williams’ can only belong to someone who could shake down a temple.

See, I was expecting some intimate campfire poems, but she left me dwelling in the world of an imagination that sparks fires!

Q. Indigo, I’d never have guessed it but you’re fairly new to all this ‘Spoken Word stuff’ aren’t you?

Yes I am indeed, everybody assumes I’ve been doing this for years when in actual fact I only decided I wanted to be a spoken word artist in august of 09 and by November 09 I was performing- so that’s about 9 months. (Performing that is)

Q. How did South London make a poet out of you?

It didn’t. I’ve always been talented at writing I just never took it seriously. I wanted to be a writer as a child but then I had a teacher who told the 8 year old me that I wasn’t smart enough and so I stopped for a while. In any case I don’t think you can really make a poet you either are or you’re not but you can inspire a poet and many things about growing up in south London have inspired me and that is evident in my work. 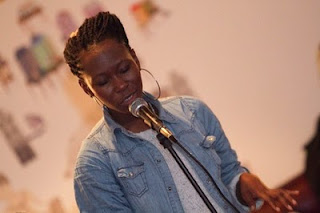 Q. I like your facebook updates, there was one that stuck with me – “Its not hard to woo a crowd. The true test is whether you can touch and leave them changed” what is the change you hope to give to your audience?

Good question! I am a strong believer that if you want to help make the world a better place then you are to be the example of the change you hope for. The only problem with that is there are millions of things that will probably work against you but I believe if you can change the way a man thinks you can change a man. So I would say the change I hope to give to any audience is the power of thought; the power to take them out of their world and into somebody else’s so that together we learn empathy, we learn patience for one another and we learn to think outside of our own boxes. Hence my slogan ‘Painting worlds with words’ (yes I have a slogan) lol

Q. I noticed you feel all the creative industries are saturated with fakes and cop-outs. Is the fact that Spoken Word is away from the mainstream and more of an underground movement part of its appeal to you?

This is such a funny question lool. I HATE COP OUTS! Fake people are inevitable but a cop out is just laziness. For example the old saying “sex sells” urm…yeah, but so do other things BE CREATIVE!

What appealed to me wasn’t the lack of fake people because anybody who knows enough people in the scene will know that is far from the truth as I am discovering lol (ooooo no she didn’t -yes is I did.)

I joined the scene because nobody knew who I was, nobody gave a shit about who I was and that was exactly what I needed at that time especially. I’ve come from the music world and I’ve grown up around extreeeeemly talented people, which meant a VERY high standard was always expected of me from a very young age. After a while music wasn’t fun anymore and then I found spoken word and I could be free with it, I could do a bad show and it really wouldn’t matter. I didn’t have that freedom when I was a singer but it turns out I’m better at spoken word anyways. (In my opinion) 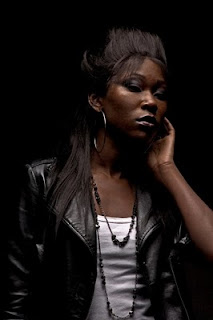 Q. How far can a Spoken Word artist go to be successful before "selling out"?

You could sell out at any point it depends on why you do what you do. Ultimately the only person you are going to answer to is yourself, every choice is a declaration of who you choose to be so the moment your actions contradict your conscious choice then you have gone back on yourself. Its just a matter of whether that bothers you or not and it also depends on your interpretation of success. 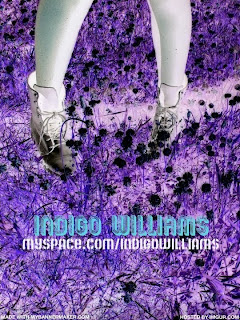 Q. You’ve been performing a lot of your poetry at festivals recently. What is this teaching you as an artist?

It’s taught me that I would only ever go to a festival if I were an artist because you get privileges any other way is straight up LONG! Those toilets are just nasty!

Q. What’s next for Indigo Williams?

Graduating uni, Freelance journalism, starting a company called ‘The Platform’ (look out for it.) Acting, films, Art + poetry exhibition, writing a book, dusting off my guitar and combining my poetry and music and hopefully leaving a trail of change wherever I go especially with young people. I plan to work with young people in all of this…at some point.

Q. Finally Indigo, next time you perform and I’m in the crowd look at my “wow, what the fuck “face and tell me if you like it?

Haha okay. I’m gonna actually take a picture of your, ‘wow, what the fuck face” lol.

For more on Indigo Williams - http://accordingtoindie.wordpress.com/
http://www.myspace.com/indigowilliams
Posted by Raymond Antrobus at 02:50