Performers – it’s true. We are completely and utterly insane. There is no escape from this. Think about it… the intensity of pre-show nerves is every “DON’T FUCKING DO IT!” symptom your body can give. You shake, you shit, you throw up, you piss, you sweat… shit man, we become one big disease crumble.. yet, we have some inner lunacy battling though these very human instincts. The dream of being acknowledged, validated, idolised, self-employed etc wins… almost every time. This is not a criticism but we performers are complete masochists and our audiences are complete narcissists, seeking out pain and pleasure in others and connecting only to what they see (or want to see) in themselves.

I’ve performed a lot of shows this year and you know, some of them went very well… The tour I did in Chicago has changed quite a few things about me as a writer/performer. Most of the top Chicago poets I met are out of performing arts schools, creative writing academies and have every bit of paper that suggests they are a lot smarter than me.

I haven’t been to drama school, university or even college. I left school at 16 with four GCSE’s. Pretty much everything I’ve learned about performance and writing has been from my own research. I owe a lot to Wale Ojo who is a renowned Nigerian actor and director who came up to me after a show and said “you are a good writer but not a very good performer… you need work” and then taught me in just one workshop how better to approach the stage. Breathe, articulate, understand who you are talking to and most importantly… enjoy yourself… see it, believe it and your audience will too. 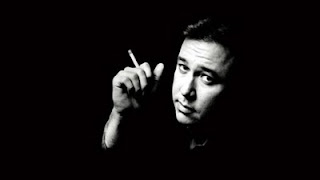 Bill Hick’s stage persona was an anti-establishment, social-reformist, critical thinker, spoken word artist and comic. He got a big break by being asked to do a set on David Letterman’s talk show (one of the most popular in America). Bill gears up and performs his strongest set to date, talking in the book about all the nerves that rattle your body in pre-show mode, he smacks his set, the studio audience loved him and Letterman himself is in fits of laughter. It’s a proud moment for him. He goes home and sits in a hot bath to unwind and congratulate himself only to receive a phone call to say he’s been cut from the show due to censorship issues. This hurt him so much he called his mum with tears in his eyes shouting “MUM THEY CUT ME! WHY DON’T THEY SEE… THEY’RE JUST JOKES!?” this shows one of the most popular out-spoken/ anti-establishment performers of the 90’s being rejected by (drum roll) brrrrrmmmmm THE ESTABLISHMENT! ... and it cut deeply into him.

I’ve asked myself a few times why I do what I do? … I want to be heard. I want to promote a form of entertainment that engages people emotionally and intellectually through this weird and wonderful thing called language. It's amazing to me that we live in an age of gloss machines constantly flashing their lights, yet, we can give Spoken Word shows where audiences are engaged and transfixed by one person and their stories/rhythms/persona.

I want to provide an alternative to the numb, gutless brain of mainstream media… it's amazing how many people think there is no other way. Overall I think I do this because I am completely and utterly insane.

I also owe a lot to other insane people like Musa Okwonga, Joshua Idehen, Mista Gee and Niall O'Sullivan.

Niall booked me for his book launch after my second ever gig (or display of madness) and he encouragement my insanity. I told Niall recently "you are one of the only people who said I could have a career in poetry" and he said "poetry!? I thought you wanted to be a tobacconist"

P.P.S Here's a list of up coming gigs (hyperlinks included) 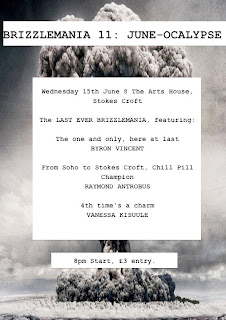 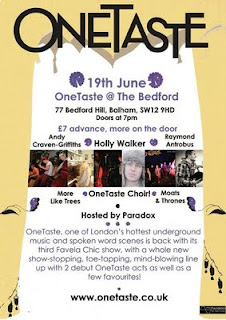 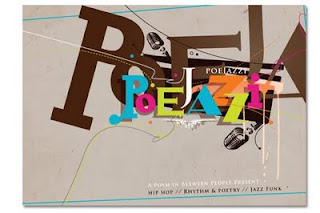 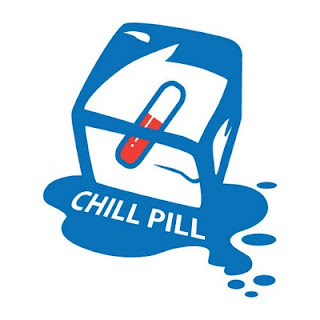 Posted by Raymond Antrobus at 04:50