Conversation With A Homeless Man On Shoreditch High Street

Yeah bruv, no one’s giving today. People get fuckin’ miserable when it’s raining, it’s like the sky takes the sun right out the people. Ya know, people think you got to be dumb to end up homeless, but look at these people bruv, any of them can end up smelling like the shit they walk into. Even my dad said be careful of women, they fuck you up bruv, alcohol and drugs were invented by men trying to run a woman out their skin. Nuff men top themselves over women, I get it, trust me bruv. If I could start over you know what I’d do? I’d leave the crazy bitches alone and I’d learn three words a day in another language. Within three years I’d speak five languages, there’s a lot of money in language translation bruv. I got a daughter ya know. Beautiful little girl, I don’t see her cause’ the mum fucked me off. Bruv, you ever felt your heart in someone else’s hands? Women don’t have finger nails bruv, just blood and fucking claws. I shouldn’t be thinking about this shit too much, you can’t think yourself happy bruv. I had a mate who read a lot of books, he was into that radical black shit about Africa and shit. My man went fucking psycho, shot two policemen on his doorstep then shot himself, it was the books bruv, he went fucking mad. I got two books, the dictionary and the bible. Yeah, there’s this barber shop I go to and they cut your hair for free if you say you believe in God. Bruv, I walk in there holding my bible so I can get a free shave too, they say I got to look good for God. I think its bullshit though, I just want a free cut in case I see my daughter. Wouldn't want her to see me looking like this. Anyway, bruv, you got any change?
The sun has come out. 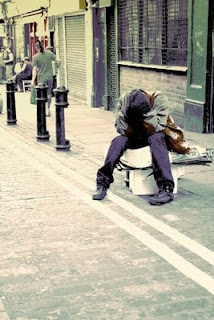 Posted by Raymond Antrobus at 14:19