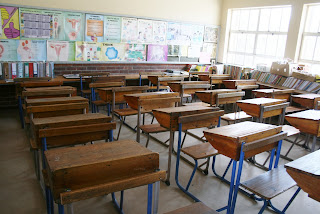 Imagine, you're in an African country you've never been in before and you've just walked into your first classroom as a teacher.
The Principal introduces you to the wild eyes of thirty five children as "a young man from England".

A boy, sitting at the back of the room, eyes like a lion cub throws his voice at you.

He tells you he supports Man United. You try to find common ground by telling the class you are an Arsenal fan.

The whole class jeers and secretly, you congratulate yourself for turning them against you already.

When the class settles you are pulled aside by the Principal who has this to say...

See that girl sitting with her head on her desk?
Her mother died of Aids when she was born.
She has it too. Some of the children know.
Every day those children ask her why isn’t she bleeding.
They don’t understand how she has Aids and still looks like them.

Matthew, the boy who sits two rows from the back,
he broke two of the seventeen windows
that were smashed here last week.
His mother came to school with a bat that day.

This is a Primary School, Malik is fourteen years old,
repeated the sixth grade three times.
his father had three wives at the same time before he had a stroke.
Now Malik's in a Home, the boy can’t sit still.
He feels his whole life in his stomach,
we all have to pretend he isn’t ill.

You’ve got to talk to David. He’s the boy by the window,
he’s from the Congo. You’ll see him climbing trees in the playground.
His mother said he takes all the blankets at home and sleeps on the roof.
His world has its own sky.

The girl with the pink hair band, that’s Kim.
She never does her work, she just wants to draw.
See drew all the mountains on the wall,
She won’t get that far if it’s all she can do.

A cartoon is not a career path.

This week the children have been drawing diagrams of our solar system
Show them, show them how to colour in their planet. 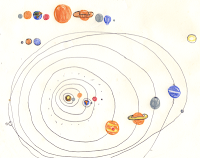 Here is the Spoken Word Version of this piece.

Posted by Raymond Antrobus at 10:55