District 6 (The film District 9 is based on this history)

District 6 is an area in Cape Town where 60,000 people were forced to leave their homes in the sixties after the white government declared the district a “white group area”. When South Africa became a democracy in 1994 the original residents were given the option to move back. 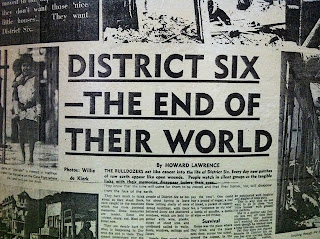 Conversation With A District 6 evictee.

They told us we could go back, back to what?  I knew if my avocado pear tree was not standing up in the garden I would not go. As a boy I’d climb that tree, eat the avocado pears and throw the pips at passers by.  My neighbor kept homing pigeons and he lost them all after his removal. He was sent to live in a township shack and couldn’t make his birds follow. Guess you can’t shit on pigeons. Some of the residents did fight but they only stayed in their homes to watch the colour of the district pale around them. Its seventeen years into democracy and people can’t forward move. There is still so much anger here because of apartheid. Even my old neighbor to this day will not forgive the white government, but now he’s as angry at the black government. Since 94’ not one president has served a full term. They get into office and exploit and cause corruption for their own financial gain, knowing they won’t be in power for long. Most of the coloured people will tell you the white government were less corrupt and people lived better with official division. The coloured people feel this because when the whites were ruling they favored the coloured (including the lighter skinned blacks). Generally they got better jobs and education so when the blacks took power the coloured people couldn’t believe it. They had tried so hard to disassociate themselves with the blacks and then they ended up ruling the country. If we are a rainbow nation every colour is still living behind its own fence. It’s a shame we are a nation of people defined solely by the colour of our skin before our South African nationality. But I will say there are also great people here doing great things to ensure South Africa becomes one of the driving forces for a united Africa, an Africa that is always home.
Posted by Raymond Antrobus at 07:35