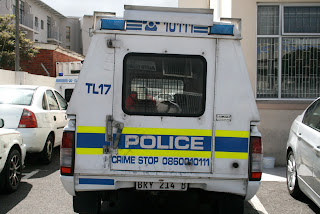 I was woken up by someone shouting outside my flat one morning, probably nothing right? – I got up and had a shower. I came out of the shower and went to put my watch on which I left on the bedside table before I went to sleep.

I searched the flat furiously, even getting suspicious about the old Indian man I shared the flat with; he was up and ironing his shirt in pink slippers.

Me - Hey! Have you seen a watch, I left it right here?

I wasn’t convinced but while I was thinking about ways to break into his room and trash his stuff I heard shouting again outside and went to investigate. Outside there were five Indian/Cape Malayan guys, all about my age (twenty five) talking excitedly to two ladies in headscarves, I listened in...

... yeah, he climbed the wall and tried to break through that window but Bonita woke up and called us. We were there in minutes and we caught him... fucked him up! ... 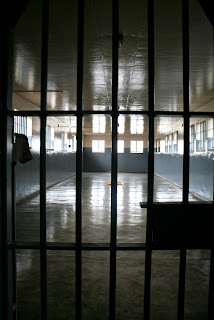 I went into the house and told my landlord Mr.Gool and he drove me to the police station.

When we arrived I told a police officer at the reception desk, (a black man, about mid-thirties) about my watch and he knew instantly what I was talking about.

Police Man – “How much would you say exactly?”

Me – “Errrm... I bought it in London for about seventy five pounds”

The police officer disappeared and came back with a sheet of paper and wrote down the incident. It took him about twenty minutes. He then showed me what he wrote and asked me to sign it. He made the incident sound like a children’s story. It started like this...

“Last night everything was fine. The victim came home and took off his watch and went sleepy. He woke up and it was loud suddenly. Something might be happening but no. Then victim see’s watch gone and thinks OH NO! And now his morning is not fine.”

I sign the statement and ask the police officer if he’s ever considered writing screenplays. 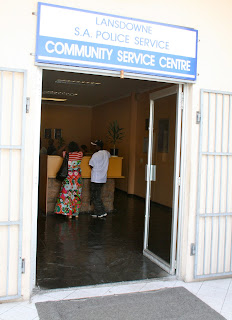 The police office disappeared with the statement and when he came back he told me the man they have arrested is denying the watch is mine. He wants me to go into the jail cell and speak to him directly.

I followed two other police officers (they were also black men) down a corridor that smelt like burnt rubber. They unlocked the cell door and we walked in. Instantly I wished I had my camera.

Scratched into the walls (probably with a knife or keys) someone had written things like - “I will never sin again”, “all I need is one love”, “my spirit is stronger than any bone” “I will do right, right now!” etc.

The robber was sitting on a bed with grey blankets over his body, he looked mixed race and young, about twenty years old. The entire left side of his face was beaten and swollen. His ear puffed up the size of a kidney and he was bruised so badly he couldn’t open his eyes. I wondered if this was done by the police or the five guys next door? (or both) -

It was weird, before I went in I anticipated feeling angry but I felt sympathetic, my mind went through a whole list of potential scenarios that would lead to a young guy like this breaking into houses.

One of the police officers took my watch out his pocket and asked the robber “Does this belong to you?” the robber barely lifted his head and answered drowsily, “Yes, my watch”. The police officers got aggressive and spoke in Afrikaans, pulling his shirt and speaking loudly in his face until suddenly in English the robber said “Maybe I have a watch that looks like that!” this was enough for them. They made him sign a form and then the police officer put my watch in his pocket.

After a passive protest and realising they are not going to give me my watch back, they say to come back in two weeks. I get my crime reference number and leave with Mr.Gool.

Two weeks later I’m back at the station and I’m being told the watch is still held in the court. I threaten to file a complaint, then they say the detective involved in my case isn’t present and he needs to sign the watch out. I then go into a show about being from London and having to leave tomorrow and how I'll have to make arrangements for my Cape Town friends to pick it up. I then say how I’ve come to South Africa as a teacher and I deserve better treatment! Then I’m told to wait in another office.

I’m there for half an hour before a woman arrives with an envelope. “Your watch" she says and hands it to me. I signed the forms, opened the envelop and find the watch isn’t working.

I sigh but decide not to complain; instead I take out my camera and take a photo of the desk and file cabinet in the office.

“What are you doing?” asks the police officer, “I just took a photo" I said  holding up my camera as if to prove it's not a weapon, "I’m from London you see and...” “no!” she cut me off “that’s illegal! You must come with me!” now I'm being marched into another office. We walk in and she points at the chair, “Sit there”.

I was in that office for an hour explaining why I took a photo and how I was trying to be touristy on my working holiday.

I signed some forms agreeing that I wasn’t a spy and I wouldn’t release any photos in the police station. As I was walking out one of the officers recognised me as the “watch guy”, he saw me holding my camera and said “Hey! You can take a picture of me if you want”. 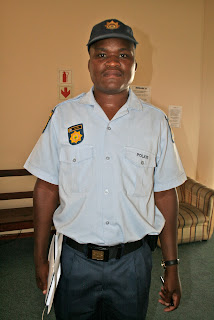 Posted by Raymond Antrobus at 00:00