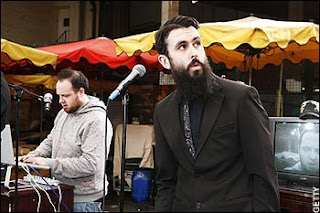 It would be a challenge to forget Scroobius Pip. The appearance of a full thick and untrimmed bush of a beard grown out the face of a man who wears suits with baseball caps to perform poetry is quite striking.

I was first made aware of Scroob in 2007 when a mate of mine invited me to a music night called ‘The Spitz’.

The opening act was cockney poet ‘Tim Wells’. Put Tim Wells in any Irish or British pub and you’d think he owned the place.
He’s a stocky geezer who took the stage in an overcoat, then rolled up his sleeves to reveal two inked up lumberjack forearms.

Get on the wrong side of Tim and expect a baseball bat to the face or a poem dedicated to your mother, best to expect both.

The next act was ‘Chris Redmond’ a.k.a ‘The Ventriloquist’. A slim man in a straw hat who has the most astonishing talent to make a stroll through the park sound like a spiritual exploration inside three dimensions of a supernatural universe (without being hippy about it).

Some lads from Essex topped the night. The wordsmith ‘Scroobius Pip’ and the electric kicks from lap top producer ‘Dan Le Sac’. It’s cliché’ but this line up on this night changed my life.

Since then, The Spiz has been run out of the East End and Scroobius Pip has gone on to release two successful albums with Dan Le Sac, sign to ‘Strange Famous’ (a label run by American Spoken Word and indie Rapper superstar ‘Sage Francis’) tour around the world and god forbid – has he ditched the suits and trimmed his beard? 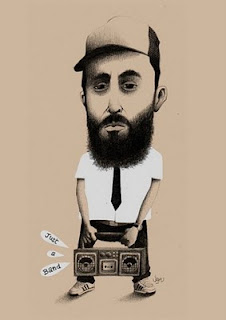 Q. Scroob! Haven’t seen the suits for a while, where are they?

I still have them! It’s a weird thing, the whole wearing suits thing was never really a stage image. When i worked in a record shop i wore jeans and t-shirt to work. Because of this, i enjoyed the aesthetic of coming home and changing in to a suit for my evenings and nights out. Sounds ridiculous i know. So, after a year or two of wearing suits onstage it kind of became a uniform again so I relaxed on it. I still always wear a shirt and tie though! Got to keep some kind of standard around here...

Q. You’ve had quite an amazing career so far. You’ve inspired poets all over the country and shown us maybe commercial success as a poet is attainable. Was popularising poetry ever on the agenda?

Not particularly. To be honest, there was never much of an agenda to start with. I wanted to write, and, when i had stuff I was pleased with, I wanted to perform it. Everything else after that has just been a bonus. Commercial success is often shied away from in the quest to be "underground" but ive never been sold on that. If you are writing something that means something to you then surely you would want as many people as possible to hear it? Obviously, if you start to change what you write about in the pursuit of commercial success then thats a different story. But, in general, its been great to get to speak to so many different people around the world, and to then have the opportunity to put on poetry nights and show more of the scene to some of the people that have enjoyed what i do. 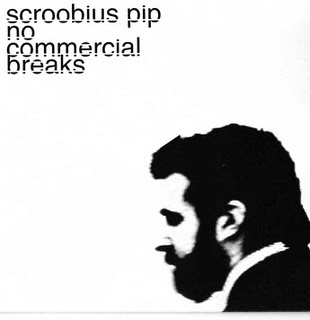 Q. I’ve seen you do Spoken Word sets as well as music sets with 6ft Pianist, Dan Le Sac and even Kate Nash. Is combining your poetry with music always necessary to reach larger audiences and do you make compromises as a writer?

I dont really know to be honest. For me, i have always been a huge music fan. I am a music fan before a poetry fan really, so there was always a natural urge and desire to work with music too. I stumbled in to spoken word through the lack of anyone to make music with! So when those opportunities started to come up i was eager to see what could be achieved.

Q. How has your journey as an artist changed you as a person since your days participating in slam poetry events and open mic nights?

Its hard to say from my perspective really. I dont really feel it has changed me as a person much. One change is not having as much time to write new stuff as i used too! But thats a product of having a busy schedule so i cant complain about that. In the early days i was always quite confident at the open mics and slams. I always felt that, if i am willing to stand up in front of a room and tell these poems, then i must be pleased with them and proud of them. 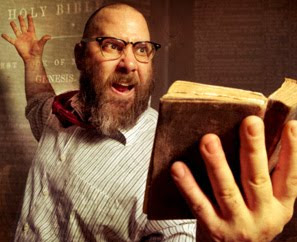 Q. You got signed by the amazing Sage Francis, how did this come about and what does he expect from Scroobius Pip?

Signing with Sage was a huge honor! I have been a fan of his for many years and he has definately influenced my work in many ways. It basically came about when someone he knew pointed him in the direction of our myspace page. "Thou Shalt Always Kill" was just starting to build a buzz and he left a comment saying he liked it. Fast forward a year or so and we were finishing off our first album (Angles) and we didnt have a record deal in America. I decided to send Sage a myspace message asking if he would be interested in releasing our album and he said "Yes"! It was as simple as that! Im not really sure what Sage "expects" from me really but it has been great to build a relationship with the guy. Long may it continue.

Q. This year you published a book of your poems which seems to be doing well by poetry publication standards. What’s the story behind this and are you reading any poetry at the moment? 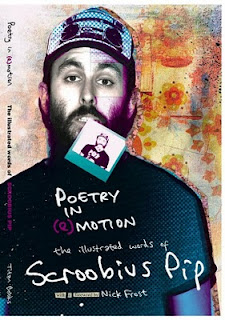 The answer to your first question kind of lays in the answer to your second. Im not reading any poetry right now. And i have never really been a big reader of poetry. It was this fact that made me uncomfortable when i was approached to release a collection of poems. I had always loved watching poetry performed live but rarely read that much. It therefore felt somewhat arrogant to release a book of poetry. "I dont read much of the stuff but you should read mine..." After some thought i came up with the idea of presenting a collection of poems in a more unusual and engaging way. I then spent two years getting different artists and illustrators to submit visual interpretations of my poems via myspace. This was always a side project whilst touring so it all just seemed to build up and come together. All of a sudden i had a graphic novel of poetry. I got in touch with a few different publishers and when Titan showed an interest i jumped at the chance to work with them. Having put out "the watchmen", "Kickass" and numerous others they seemed like a great choice. Several moths later, i had a book in the shops! It really was overwhelming.

Q. I’ve noticed sometimes you’re referred to as a rapper and sometimes as a Spoken Word artist or a poet and I’ve never seen you correct anyone... Just what is Scroobius Pip? 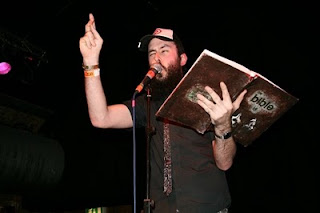 Whatever! haha. I have never been too precious over titles. I normally choose "spoken word" artist as it is the most literal description of what i do. I speak words. All the time. Sometimes to crowded rooms, sometimes in a recording studio. I think people are often too eager to label things when we dont really need too. I took my name from an Edward Lear poem about that exact same issue. Trying to catagorize that which cannot be catagorized.

Q. Scroob, you’re an absolute inspiration to so many of us out here... but how much would I have to pay you to chop the ol’ beard?

Young man you don't have the bank balance to enter in to such negotiations...
Posted by Raymond Antrobus at 07:31