Do This In Remembrance Of Me 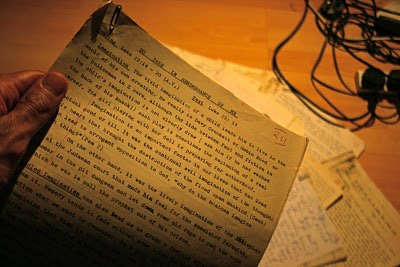 The other day I walked past a Church. Outside there was a banner put up on the door that said with God everything is possible. I always thought God was some kind of metaphor for the spirit of our imaginations – I still do.

My Granddad was a minster at a Congregational Church and gave Sermons every Sunday. I never met him; he died of Leukaemia two months before I was born. My Grandma keeps a photograph of him on her mantelpiece above her fireplace. He’s lying down on a grass lawn and even though the picture is in black and white you can tell the sun is shining and the grass is warm.

In November last year I read one of my poems on BBC Radio. My Grandma told everyone at her Church. The ratings must have gone through the roof – 50 little old ladies in the middle of Hertfordshire were roaring from their sofas as my poem was spoken into their living rooms.

“IT’S BARBRA’S GRANDSON ON THE RADIO!”

When I next saw my Grandma she spoke much about my Granddad and how he’d written sermons, short stories and poems while at home and travelling around. She gave me a box with the text of many of the sermons he gave. The papers looked brown and aged, some of the sermons were written up on a typewriter and others in cursive hand writing. His writing is incredibly neat and it’s always in blue. I couldn’t wait to be left alone with these. I took them home and started reading them in my room.

The papers smelt faintly rotten so I opened the window and read the sermon at the top of the pile. The heading read “Do this in remembrance of me”

I turned towards the window and read this out loud.

“Imagination. The vivid imagination of a child leads him to live in the world of his own creating. He really is Davy Crockett or Robin Hood or the policeman in Z Cars. Although the line between fact and fiction in the child’s imagination is not clearly drawn (ask him if he’s washed the back of his neck) such play is sometimes the beginning of a real career. The girl playing with her doll is preparing for motherhood. Imagination is an important factor in our lives that can lead to actual good or ill. It was the continual evil imagination of the thoughts of his heart that brought the destruction of the flood upon mankind, (Geneses 6) it can lead to arrogant opposition to God, “why do the heathen imagine a vain thing?” (Psalm 2)

On the other hand, it was the lively imagination of the Ethiopian guard at the Judean court that made him feel for the emaciated Jeremiah, a prisoner in the pit dungeon who let down some old rags to pad the rope with which he was to pull the prophet out of his prison.

Kindled Imagination can also lead us to grasp a reality so that we can act upon it. Memory tends to fade without some token to recall to the imagination of what we remember. In a play by J.B Priestly, a young widow complains that time is robbing her even of the memory of what her husband looked like. One reason for a photograph is so that we can recall to mind, through the imagination, not only the appearance but the personality of someone far from us”

I stopped reading and stood there with the imagination of my Granddad, a man who only exists to me as a photograph I’ve smiled at for years. I heard his voice echo inside a church hall and I smiled so hard you would have thought I was crying.
Posted by Raymond Antrobus at 01:35