Hey Chicago/Ray & Sully On Love/ Featuring At The Green Mill 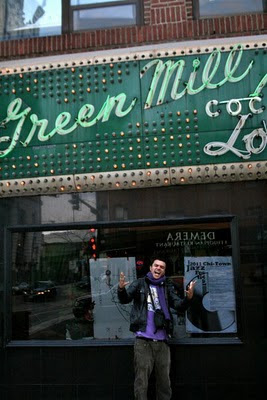 Hey Chicago! You are living proof that the 90s is the new 80s. You showed me enough black guys in flat tops, high tops and light blue Denim to confirm the new wave. Chicago, you are a really cool human being. You talk with a cigarette hanging out your mouth; you have pictures of The Beatles and Hendrix all over your walls. You tell everyone James Dean is your brother and you miss him dearly... no, actually Chicago, you are James Dean.... James Dean with little man syndrome. You got the attitude that owns Illinois and really hot women are attracted to you but you know it... You join gangs, you get into fist fights and you’re a functional alcoholic. You’ve been on both sides of drive bys but during the day I’d take you for a breezy natured kind of guy. You give the impression that you are in control of your life on the edge... You front Chicago but I love your style and how true you are to yourself in the night time.

In Chicago I am.

Asking the natives how to experience Chicago they always tell me what plate of food should be in front of me... Pizza, Mexican, Fish, Costa Rican etc. I’ve hosted a few international poets around London recently and when they’ve asked how to experience London the food wasn’t on my tour guide.

My first few days were spent with Dan Sullivan, a 29 year old educator and poet (he hates the term ‘Spoken Word Artist’ but he is a brilliant performer and Slam Champion). Dan has a rather beautiful existence and an obsession with Zombies. He was throwing a surprise party for his girlfriend Whitney. He wanted me to play dumb about her birthday when I met her. I did. Then he got all her friends and all his friends together and had his flatmate let them into the house while Dan went to pick up his unsuspecting lady. Dan (suited and booted, looking like a true gentleman) picked up Whitney pretending to be taking her to the theatre but then “forgot the tickets” and had to turn around. Throwing a hissy fit and pretending to be annoyed with himself he enters the house with Whitney who was wearing a silk white dress and ... “SUPRISE!” Whitney loses her breath standing among a crowd of friends she’s never seen in the same room before... it was so cute and Dan is truly a G for gentleman.

Me and Dan got into a conversation about long term relationships and I told him of my difficulty to balance life as a poet and the expectations a woman has for me as a boyfriend. I’ve been through a breakup recently and it being my second long term relationship breakdown I noticed how much people change through time. You can meet someone and the person they are at that time can be perfect for you, but as we develop new ideas about ourselves as individuals, as partners we tend to become less compatible. Also living in a society designed to make us compare ourselves with other people (airbrushed celebrities, strangers with big houses and nice cars, better looking friends with great relationships and better clothes etc) we can never be happy with what we have.

Happiness doesn’t have to be an illusion and happiness itself isn’t complicated. The complication comes from our flawed expectations of ourselves and other people in our lives.

Dan said to me “when someone asked my Dad how he managed to keep a marriage going he says he’s been in a marriage for thirty years and has fallen in love with five different women” me and Dan were standing in his living room and the sun streamed into the room at that point. We both looked out the window and Dan smiled and said “I have a lot to live up to”

I found it refreshing to meet someone as creatively talented as Dan with so much love and stability in his life. We don’t have to draw off the bitter taste of our catharsis to fuel creativity. yay.

Chicago is the birth place of Slam poetry. Every Sunday at The Green Mill there is a night of jazz and poetry hosted/created by “Chicago’s only true celebrity poet” Marc Smith. The Green Mill is the Chicago equivalent of Ronnie Scotts Jazz Bar in Soho, London. There is a great poetry night at Ronnie Scotts once a month (I’ve done two feature sets there now and its always amazing) hosted by Jumoke’ Fashola check that out.

Marc Smith is in high demand and was out of town so a poet by the name of J.W Baz stepped into the hosting square. JW Baz is a poet who’s work I heard online a few months ago was blown away (partially by his piece ‘Ex Lover Count Down’) so I knew I’d have to be on form. Baz is a funny dude and he challenges his audience with jokes about babies with Lupus... yeah, he’s a monster in many ways... no wait that sounds gay... he’s one of those guys who is really talented but he’s also very aware of his talent. He can come off cocky but he’s fun and likeable and even though he knows it, he is an extremely talented poet.

The Green Mill is a poet’s dream gig, not only because of its prestigious and edgy reputation (Al Capone used to own it and pretty much every credible Jazz Musician performed there) but you get such an incredibly attentive and diverse audience. People show up to listen.. people who aren’t poets themselves... just plain fans... yes, they exist and Marc Smith has put a lot into creating an accessible community of poets that write and perform accessible poetry. Robb Q Telfer (Chicago based poet and educator) summed this up for me perfectly when he said

“if your audience consists only of other writers and poets your doing something wrong”.

Like Tongue Fu (another high calibre London based Spoken Word night and is one of my favourite gigs to attend and perform at) they have in-house Jazz improv musicians so the poets can jam with the band and they make it work every time.

While on stage at The Mill I couldn’t get over the idea that I was setting foot on the most famous performance poetry stage in the world. I gave it that kind of praise. When I said this to Robb he shrugged and said something like “it’s just a space man. Marc Smith doesn’t make a big deal out of it... in fact he’d probably mock you just to make sure you don’t take yourself too seriously up there”

It went well, the vibe was great, the turnout was great and the audience was highly responsive. I even sold the last of my chapbooks from my Berlin tour. Yep, it’s that easy to make a poets dream gig.
Posted by Raymond Antrobus at 12:38