Book Review - A Difficult Place To Be Human by Anthony Anaxagorou

The common accusation from a page poet to a performance poet is that performance poets rely on dramatics rather than substance to move an audience. The page poet feels the words of performance poets aren’t as considered, they’re too abstract or full of generalisations and random flowery cliché images that don’t tie into the overall theme of their long-winded (so-called) poems.

The common accusation from a performance poet to a page poet is that they’re boring, obscure, dense, lacking in urgency or rage or any energetic emotion that could keep a room awake. They can’t speak to anyone that doesn’t give a fuck about the moon or a poetic weather report.

Both of these arguments are out of touch and poets like Anthony Anaxagorou are proof of this.

Anthony is a fiery twenty something year old from London who has just published a book of poems entitled ‘A Difficult Place to Be Human’. 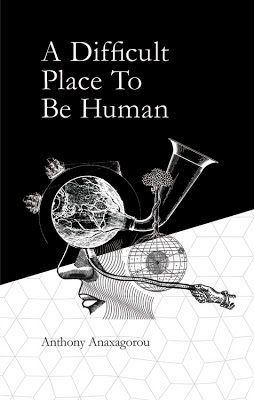 Anthony is like Vladimir Mayakovsky or Yevgeny Yevtushenko on the poetic intensity scale, which is to say he is fiercely political but deeply romantic (and probably has the soul of a Russian humanitarian poet).

I think most poetry editors would’ve told Anthony to condense his words, “too much Anthony, tone it down” they’d scream, but I know Anthony, he’s a poet integral to his charge.

However, every good poem needs a head and a heart but when you have a head like Anthony (the man is a walking encyclopaedia of history, politics and poetry) you can’t say that his inspiration (and heart) isn’t informed.

Anyone out there doing a thesis on the Spoken Word needs to study Anthony Anaxagorou on page and stage. Poems like Surgery, The Blind Beggars Grave, Non-Believer, Counterpart are wonderful testimonies to Anthony’s page craft. He achieves a control of language, subtlety and a condensation which well-read poetry readers could fault on his more “performance based poems” like ‘What If I Told You’ and ‘The Masters Revenge’. It’s clear that Anthony’s raw and rugged style is what makes his poetry exciting and accessible and this has resulted in him having one of the biggest followings on the London Spoken Word circuit.

His poems, ‘I Mean’ and ‘The Science Borrowed From Stars’ are two favorites of mine because they move me equally on page and stage, which is a rare experience. A poet that comes with lines like “you listened as a leaf does to its season” just has to be listened to.

Anthony writes poems that address the light, the darkness within himself, the people he loves and the world.

He makes Kafkaesque music with lines like “the world did not know us / but we knew it / as a wounded dog that needed death”.

But Anthony is not self-loathing or cynical like Kafka, he’s too well travelled for that. A Difficult Place To Be Human urges people to be informed political campaigners for humanity, while knowing how to love ourselves so we can love each other.

Pick up a copy from his website now - http://anthonyanaxagorou.com

Posted by Raymond Antrobus at 18:30

Email ThisBlogThis!Share to TwitterShare to FacebookShare to Pinterest
Labels: A Difficult Place To Be Human, Anthony Anaxagorou, Review