Today I sat in my mums kitchen like a British boy with gaps in his history and teeth, trying to explain to my sister how a man shot a boy (armed with a packet of Skittles) dead in Florida and there is no law that called it murder. She looked at me confused, then I explained, the boy was black and the guy was white. This made it make sense to her. It's 2013 and this shit still makes sense? shame.

I started writing a poem about Skittles. How Skittles were invented in Britain in the 70's and were integrated into American society in the 80's. In 2012 skittles became the most "liked" candy brand on Facebook, the poem explained how America felt it had imported a rainbow. It's not an accurate poem because it doesn't reference the colour of the Skittle that was enslaved and demonised by arrogant westerners that call their countries "developed".

As a culture we in the west are still trying to come to terms with a very complicated bloody and colonial history, it's a long dialogue that too many people don't want to engage with, that is why no one is tasting rainbows, because cases like this make sense only when the race of those involved is contextualised.

Below is an empathetic letter to George Zimmerman posted on facebook. 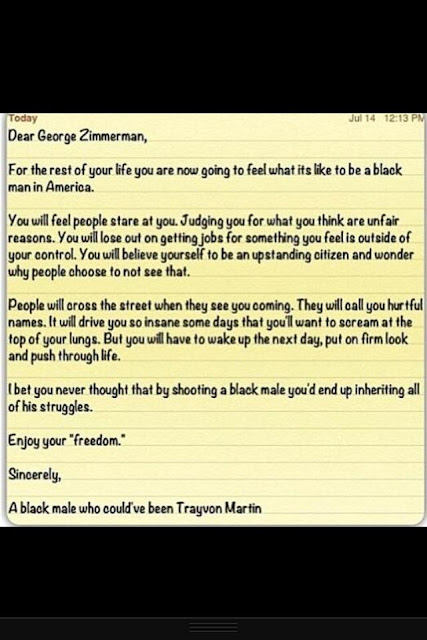 Posted by Raymond Antrobus at 15:38