That Time Elton John Told Me To Fuck Off

Did I tell you about the time Elton John told me to fuck off? – No, well, here’s a short version of that story. I’m not proud of it but I worked for the paparazzi for a week. It was June 2009 and I had just quit my job as a personal trainer. Nothing was coming out of poetry gigs but free drink tokens. I was doing some event photography at that time and the paparazzi job was suggested to me by a mate who had a link.

I decided to give it a go and went to meet two men (one looked to be about 25 and the other looked to be in his 50’s) “you can make anything from £100 – £20,000” says the older man, “when Nicole Kidman got pregnant she tried to hide it from the press but we managed to sneak into her garden and get shots of her baby bump, we made at least £5,000 a shot, then she had to come out and admit her pregnancy”.

They explained the process to me “you've got to have your own equipment and camera, as soon as you snap a celebrity you upload the pictures where they’re sent to a small room filled with a representative of each newspaper in the UK. A bidding war begins and you get 60% of what they pay, the rest goes to us as your agent”

They told me the most valuable shots you can get are celebrities showing wrinkles, scars, wedding rings, bruises, grey hair or any kind of deformity.

They invited me to their next job which was in Mayfair. They got a tip off that Peter Andre was in the area. We waited outside the Hilton Hotel for an hour until he arrived. When Peter was spotted he had a child with him, he didn’t want to be spotted and hurried inside. We needed a shot of Peter’s face but with him hurrying away and his back to us one of the paparazzi photographers determined to get the shot shouted “PETER! FUCK YOUR KIDS!” Peter turned around and his screw face was snapped up. We got the picture and it appeared in News Of The World the next day with the headline “Peter Andre distressed over Jordan break up”

The next job was Elton John’s birthday party. We drove all the way to Winsor one sunny afternoon and parked as close as we could to his house hoping to get shots of celebrities driving in. There was about eight paparazzi photographers who would run out in the middle of the road every time a fancy car drove by. Victoria Beckham, Ronnie Wood, Matt Lucas were all spotted.

This is the part I’ll never forget... The black Cadillac that drove by and us photographers crowding around it in the road to see who it might be. I was in perfect position as the window rolled down and slowly Elton John’s face emerged... he was wearing tinted sunglasses and a white suit... then his middle finger stuck right into my face as he shouted “FUCK OFF!”

That was my last day as a paparazzi photographer.

Every now and then my mind pulls up this image of angry Elton John in his white suit telling me to fuck off.

What happened to the photos? - well the computer they were on crashed and I lost them all. Most of the photos were of my own reflection in tinted Cadillac windows - there was no value in them anyway. 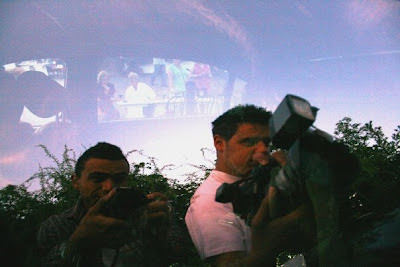 Posted by Raymond Antrobus at 06:41